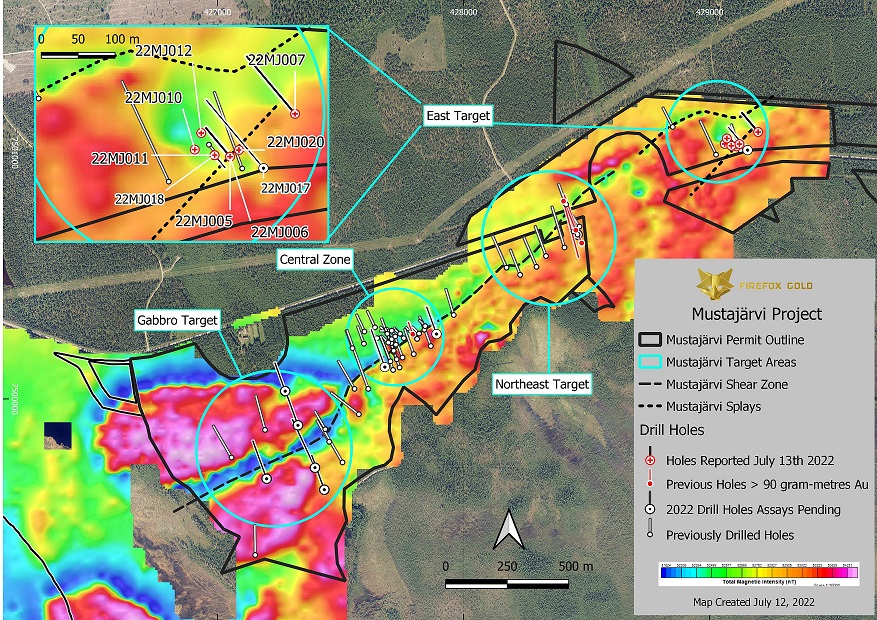 The details of several key drill intercepts are highlighted below:

FireFox also reports results from seven additional drill holes in the first drill program at the Sarvi Project. There were no significant gold intercepts encountered in those holes, but work is ongoing to interpret those data and develop targets for the next round of drilling on the large property that adjoins Rupert Resources’ Area 1 discovery.

“These results continue to highlight the high-grade gold potential at Mustajärvi,” commented Carl Löfberg, President of FireFox Gold. “Gold mineralization intersected at the East Target starts immediately below shallow overburden and is characterized by multiple high-grade gold intervals that remain open at depth and along strike. We are still awaiting results from two more holes in the area, as well as new tests of the Gabbro Target and Central Zone.”

The Mustajärvi Project lies along the highway between the cities of Kittilä and Sodankylä, approximately 17 kilometres east of Kittilä. The property straddles the Mustajärvi Shear Zone (MSZ), a major right-lateral shear zone that has associated second and third-order structures which further dissect the project into separate structural zones. The Sodankylä Group rocks, which are primarily to the north of the shear zone in the footwall, include metamorphosed sedimentary and volcaniclastic rocks. Geophysics and drilling have identified an extensive corridor of albite – sericite alteration in the footwall along more than two kilometres of the structure. The project remains at an early stage as FireFox and predecessor companies have drilled approximately 11,644 metres to date.

FireFox’s structural model identified repetitive dilatant zones along the MSZ where vein swarms and higher-grade gold are concentrated. Three main areas of gold mineralization have been identified along a 2.1-kilometre segment of the MSZ, namely the Central Zone, the Northeast Target, and the East Target. Four holes had previously been drilled into the East Target, with all four intersecting gold (see FireFox news releases dated August 17, 2021, January 25, 2022 and April 5, 2022). The Company drilled ten holes into the East Target during the recent program concluded in May (See Figure 1). Complete assays on these six holes were received by the Company on July 10, 2022, and assays are still pending from two holes in the area. Four of the recent holes returned significant gold intervals, as shown in Table 1, and summarized below.

This hole also passed through a zone of altered ultramafic volcanic rocks with fuchsite and pyrite. This interval was not mineralized with gold, but the presence of highly altered ultramafic rocks is encouraging based on other gold occurrences in Lapland.

22MJ005 intersected seven intervals of gold mineralization ranging from 0.8 to 3m in length within the upper 65 metres of the 189-metre-long hole. The shallowest interval started at just 10m down-hole.

Drill hole 22MJ006 extended the near-surface mineralized zone to the north. Mineralization was similar to that observed in hole 22MJ005, comprised of abundant partially oxidized pyrite in blebs, nests, semi-massive, massive and disseminated forms with fewer QCTP veins. The host rocks are highly fractured tuffites of intermediate composition that are pervasively and intensely altered by albite. Three intervals of significant gold mineralization were returned from the upper 45m of the 71-metre-deep hole. The shallowest interval started at 11m down-hole, immediately beneath a thin veneer of glacial sediments.

The high-grade gold mineralization is associated with strong bismuth (Bi), tellurium (Te), and molybdenum (Mo). There are visible blebs and stringers of molybdenite in the interval with concentrations up to 200 ppm Mo. In addition, the pyrite mineralization in this area is enriched in nickel (Ni) and cobalt (Co). Hole 22MJ006 had two intervals of cobalt mineralization within the high-grade gold zone: 1.85m averaging 0.16% Co from 24.15m and 0.36% Co over 3.8m from 26m depth, including 1.0m at 0.50% Co.

Drill hole 22MJ007 is the easternmost hole in the new East Target, located about 100m NE from drill hole 22MJ005. Drilling started in shallow glacial sediments (approximately 7m) and passed into intermediate tuffites. The alteration and chemistry of the narrow intercepts in this hole are similar to the other East Target gold zones, but most of the gold is deeper than the holes to the west. Nevertheless, these intercepts extend the strike of high-grade gold (>5 g/t) to more than 2.1 km along the MSZ.

Drill hole 22MJ011 was collared in shallow glacial cover (approximately 7m) over intermediate tuffs. The hole intersected three near surface intervals of gold mineralization similar in character to the other holes in the East Target. The drill hole was terminated at 33m within semi-massive pyrite mineralization that assayed 8.08 g/t Au and was strongly enriched in silver, bismuth, tellurium, selenium, cobalt, nickel, and tungsten.

Hole 22MJ011 was one of several holes in this campaign drilled with a light hybrid drill rig, which is used primarily for base-of-till drilling but is capable of reaching a maximum depth of 33m when drilling core to support bedrock mapping. Drill holes 22MJ012 and 22MJ020 were also drilled with the hybrid rig. Hole 22MJ011 was successful at intersecting potentially significant gold, and therefore, was subsequently twinned and deepened using a larger diamond drill rig in hole 22MJ018, for which results are pending.

The rocks from deeper in these East Target drill holes are strongly sheared and locally brecciated, exhibiting abundant intense sericitization. Disseminated pyrite in the altered host rocks is also more common in this newly drilled mineralization, particularly in the deeper intercepts.

The FireFox team has noted several key differences between the mineralization in the East Target and the high-grade gold reported in 2021 from the Northeast Target, including:

The table below summarizes the location information for the 2022 Mustajärvi East Target drill holes.

FireFox further reports that the first round of drill testing of the Sarvi Project has been completed. In addition to follow-up of favourable trench results and other targets in the northwest of the property, several drillholes tested magnetic highs divided by a NE-SW structure with a corresponding magnetic low. Assays from all 12 holes have now been received, including the first five which were reported in FireFox news release dated May 27, 2022. No significant gold intercepts were reported from the most recent seven drill holes, however the program added considerable information to the geological database that will support continued target delineation and drilling. Drill collar information for all 12 holes can be found in FireFox news release dated May 27, 2022.

The core was transported from the rig to the Company´s core storage facility in Sodankylä, where FireFox’s exploration team conducted the geological and geotechnical logging and selected the assay intervals. Assay intervals were generally 1 metre but in some circumstances were modified according to lithological boundaries and other factors. FireFox geologists maintained chain of custody and sampling procedures according to best industry practice and with due attention to quality assurance and quality control, including sampling field duplicates and insertion of certified standard and blank samples.

FireFox team members transported the samples to an ALS sample prep lab in Sodankylä. The samples were sawed then crushed to -2 mm, split and pulverized into 1kg pulps, before being shipped to the ALS facility in Rosia Montana, Romania for gold by fire assay of 50 gm aliquots with AAS finish (method Au-AA24). Samples assaying above 10 g/t gold are automatically re-assayed by a 50 gm fire assay with gravimetric finish (method Au-GRA22). At FireFox’s request, these overlimit assays were completed in triplicate in order to evaluate the homogeneity of the gold in the prepared samples. Other elements, altogether 48, were measured after four-acid digestion by ICP-AES and ICP-MS (method ME-MS61) at the ALS facility located in Loughrea, Ireland.

ALS Laboratories is a leading international provider of assay and analytical data to the mining industry. All ALS geochemical hub laboratories, including the Irish facility, are accredited to ISO/IEC 17025:2017 for specific analytical procedures. The Firefox QA/QC program consists of insertion of certificated standard material and blanks into the analytical batches, none of which showed significant deviations from recommended values in the reported data.

Patrick Highsmith, Certified Professional Geologist (AIPG CPG # 11702) and director of the Company, is a qualified person as defined by National Instrument 43-101. Mr. Highsmith has helped prepare, reviewed, and approved the technical information in this news release.

Dr. Sven Hönig, Certified European Geologist (EFG EurGeol Title # 1789) and General Manager of Exploration for the Company, is a qualified person as defined by National Instrument 43-101. Dr. Hönig has supervised the field work reported herein and has helped to prepare and approved the technical information in this news release.

Finland is one of the top mining investment jurisdictions in the world as indicated by its multiple top-10 rankings in recent Fraser Institute Surveys of Mining Companies. Having a strong mining law and long mining tradition, Finland remains underexplored for gold. Recent exploration results in the country have highlighted its prospectivity, and FireFox is proud to have a Finland based CEO and technical team.

For more information, please refer to the Company’s website and profile on the SEDAR website at www.sedar.com.

The information herein contains forward looking statements that are subject to a number of known and unknown risks, uncertainties and other factors that may cause actual results to differ materially from those anticipated in our forward-looking statements. Factors that could cause such differences include changes in world commodity markets, equity markets, the extent of work stoppage and economic impacts that may result from the COVID 19 virus, costs and supply of materials relevant to the mining industry, change in government and changes to regulations affecting the mining industry.

Forward-looking statements in this release may include statements regarding: the intent to conduct additional drilling; the belief as to the location of the most prospective gold targets; the location of targets for future drill programs; and the current and future work program, including the extent and nature of exploration to be conducted in 2022. Although we believe the expectations reflected in our forward-looking statements are reasonable, results may vary.

The forward-looking statements contained herein represent the expectations of FireFox as of the date of dissemination and, accordingly, are subject to change after such date. Readers should not place undue importance on forward-looking statements and should not rely upon this information as of any other date. FireFox does not undertake to update this information at any particular time except as required in accordance with applicable laws.